Back in March, I was delighted to learn that my proposal to speak at the Conference of the Association for Software Testing in Nashville was accepted and it was then the usual nervous & lengthy gap between acceptance and the actual event.

It was a long trip from Melbourne to Nashville for CAST 2017 – this would be my first CAST since the 2014 event in New York and also my first time as a speaker at their event. This was the 12th annual conference of the AST which took place on August 16, 17 & 18 and was held at the totally ridiculous Gaylord Opryland Resort, a 3000-room resort and convention centre with a massive indoor atrium (and river!) a few miles outside of downtown Nashville. The conference theme was What the heck do testers do anyway?

The event drew a crowd of 160, mainly from the US but with a number of internationals too (I was the only participant from Australia, unsurprisingly!).

My track session was “A Day in the Life of a Test Architect”, a talk I’d first given at STARWest in Anaheim in 2016, and I was up on the first conference day, right after lunch. I arrived early to set up and the AV all worked seamlessly so I felt confident as my talk kicked off to a nicely filled room with about fifty in attendance.

I felt like the delivery of the talk itself went really well. I’d rehearsed the talk a few times in the weeks before the conference and I didn’t forget too many of the points I meant to make. The talk took about 35 minutes before the “open season” started – this is the CAST facilitated “Q&A” session using the familiar “K cards” system (borrowed from peer conferences but now a popular choice at bigger conferences too). The questions kept coming and it was an interesting & challenging 25 minutes to field them all. My thanks to Griffin Jones who facilitated my open season and thanks to the audience for their engagement and thoughtful, respectful questioning. 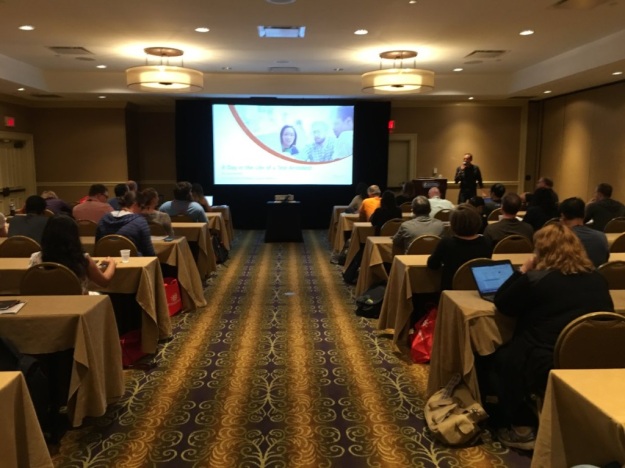 A number of the questions during open season related to my recent volunteer work with Paul Seaman in teaching software testing to young adults on the autism spectrum. My mentor, Rob Sabourin, attended my talk and suggested afterwards that a lightning talk about this work would be a good idea to share a little more about what was obviously a topic of some interest to this audience. And so it was that I found myself unexpectedly signing up to do another talk at CAST 2017!

With only a five-minute slot, it was still a worthwhile experience giving the lightning talk and it led to a number of good conversations afterwards, resulting in some connections to follow up and some resources to review. Thanks to all those who offered help and useful information as a result of this lightning talk, it’s greatly appreciated.

With my talk(s) over, the Welcome Reception was a chance to relax with friends old and new over an open bar. A photo booth probably seemed like a good idea at the time, but people always get silly as evidenced by the following three clowns (viz. yours truly, Rob Sabourin and Ben Simo) who got the ball rolling by being the first to take the plunge:

I thought the quality of the keynotes and track sessions at CAST 2017 was excellent and I didn’t feel like I attended any bad talks at all. Of course, there are always those talks that stand out for various reasons and two tracks really deserve a shout out.

It’s not every conference where you walk into a session to find the presenter dressed in a pilot’s uniform and asking you to take your seats in preparation for take off! But that’s what we got with Alexandre Bauduin (of House of Test, Switzerland) and his talk “Your Safety as a Boeing 777 Passenger is the Product of a ‘Big Gaming Rig'”. Alexandre used to be an airline pilot and his talk was about the time he spent working for CAE in Montreal, the world’s leading manufacturer of simulators for the aviation and medical industries. He was a certification engineer, test pilot and then test strategy lead for the company’s Boeing 777 simulator and spent in excess of 10,000 hours test flying it. He mentioned that the simulator had 10-20 million lines of code and 1-2 million physical parts, amazing machinery. His anecdotes about the testing challenges were entertaining but also very serious and it was clear that the marriage of his actual pilot skills with his testing skills had made for a strong combination in terms of finding bugs that really mattered in this critical simulator. This was a fantastic talk delivered with style and confidence, Alexandre is the sort of presenter you could listen to for hours. An inspired pick by the program committee. 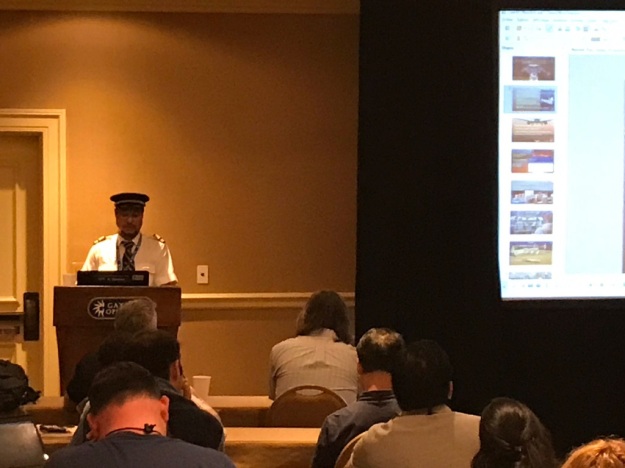 Based purely on the title, I took a punt on Chris Glaettli (of Thales, Switzerland) with “How we tested Gotthard Base Tunnel to start operation one year early” – and again this was an inspired move! Chris was part of the test team for various systems in the 50km Gotthard base tunnel (the longest and deepest tunnel in the world) from Switzerland to Italy creating a “flat rail” through the Alps and it was fascinating to hear about the challenges of being involved in such a huge engineering project, both in terms of construction and test environments (and some of the factors they needed to consider). Chris delivered his talk very well and he’d clearly made some very wise choices along the way to help the project be delivered early. In such a regulated environment, he’d done a great job in working closely with auditors to keep the testing documentation down to a minimum while still meeting their strict requirements. This was another superb session, classic conference material.

I noted that some of the “big names” in the context-driven testing community were not present at the conference this year and, perhaps coincidentally, there didn’t seem to be as much controversy or “red carding” during open seasons. For me, the environment seemed much friendlier and safer for presenters than I’d seen at the last CAST I attended (and, as a first-time presenter at CAST, I very much appreciated that feeling of safety). It was also interesting to learn that the theme for the 2018 conference is “Bridging Communities” and I see this as a very positive step for the CDT community which, rightly or wrongly, has earned a reputation for being disrespectful and unwilling to engage in discussion with those from other “schools” of testing.

I’d like to take this chance to thank Rob Sabourin and the AST program committee for selecting my talk and giving me the opportunity to present at their conference. It was a thoroughly enjoyable experience.

3 thoughts on “Attending and presenting at CAST 2017 (Nashville)”