My last conference presentation of 2015 was at Unicom’s Agile Testing and Test Automation Summit held in Melbourne on 10th December. It was good to have a gig on “home turf” after presenting in Vietnam and Estonia during the year – and it was also a great excuse to check out the award-winning architecture of the venue for this conference, the Melbourne Convention Centre.

My talk was on the Agile Testing Ecosystem from James Bach and Michael Bolton, so it was right on theme for the event and there were lots of good questions during the Q&A session following my presentation. The lectern was more like a Starship Enterprise command console and the room quite large, but the good AV system hopefully meant everyone could hear and see OK. A couple of photos of me in action follow. 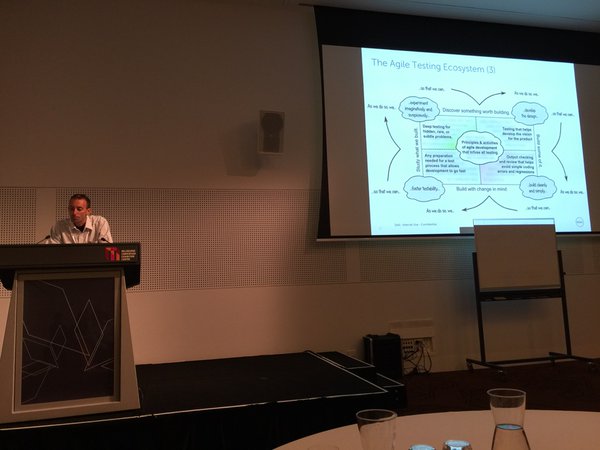 There were plenty of enjoyable talks during the day, not just on agile testing but also exploring DevOps, BDD, and Docker. I particularly enjoyed Neil Killick‘s talk on using #NoEstimates ideas for acceptance test slicing heuristics.

I’m hoping to have the opportunity to share my knowledge during more conferences in 2016, so watch this space for any updates in that regard! Also note that the TEAM group is running its own conference in May 2016 and I am on the organizing committee. The call for participation (as well as the all important registration!) is available already, so please visit the Australian Testing Days 2016 site for more information – we are delighted that Michael Bolton and Anne-Marie Charrett have agreed to be our keynote speakers, both significant names in the world of context-driven testing.

Blog posts covering my other conference presentations during 2015 are also available:

The sixth and final TEAM meetup for the year was held on 10th December, in the splendid surrounds of Robert Half‘s Melbourne offices (thanks to them for agreeing to host our meetup again) and also supported by the Association for Software Testing (AST).

I had to rush to make it for the official start of the meetup, as I’d been attending and presenting at Unicom’s Agile Testing & Test Automation Summit at the Melbourne Convention Centre during the day – look out for another blog post about that!

We deliberately chose to keep this meetup light on formal content, using it more as an opportunity for everyone to get together socially before the Christmas and New Year break.

First up was Michele Cross giving a short experience report of attending the recent inaugural CukeUp conference in Sydney. As an advocate of BDD at Sandstone Technology, Michele obviously found a lot of like-minded individuals at CukeUp and she clearly gained insight into the bigger picture around BDD in different organizations, inspiring her to continue pushing for more BDD in her company. She made specific mention of well-known Australian context-driven tester Anne-Marie Charrett‘s “When Your Testing Is In A Pickle” talk as being a highlight of the conference.

A break allowed the group of about 25 to network and talk inevitably quickly turned to testing, as it always seems to do in this passionate and engaged group! It’s great to see the passion and energy in the room when people who are genuinely interested in learning get together.

Next up was Paul Seaman to talk on the subject of checklists, having recently read the best-selling book, The Checklist Manifesto: How to Get Things Right (by Atul Gawande). This was an interesting short presentation on what can be a contentious topic among testers (and many questions, comments and discussions arose during and after this talk), but Paul made some compelling arguments for the use of checklists based on the evidence from the medical and aviation industries discussed in the book. One of the main takeaways for me was that checklists don’t dumb things down for skilled practitioners, rather they cover the mundane repetitive actions to free up those skilled folks to add the most value via their expertise.

Rajesh Mathur wowed the crowd with his magic skills (maybe “wowed” is overstating it a little!) and then it was basically networking all the way until our latest finish so far at 8.30pm.

For further meetup announcements, remember to follow our meetup.com page at:

Also keep an eye on our website, http://www.testengineeringalliance.com, where you will find all of our different offerings – including the opportunity to take the Rapid Software Testing course with the one and only Michael Bolton and a brand new testing conference, Australian Testing Days, all happening in May 2016.

On behalf of all the organizers of the TEAM meetup, thanks to everyone who has supported us during the year to get our meetup off the ground and become the success it now is, we appreciate it and look forward to great things in 2016.