I was lucky enough to be accepted speak at the Nordic Testing Days conference and the event took place in the beautiful city of Tallinn in Estonia during the first week of June 2015.

This was my first visit to Estonia and my first sight of the country was from the water, on approach by ferry from Helsinki. This busy ferry route attracts Finns looking for cheaper goods (especially alcohol) in Estonia and it was a gentle couple of hours over to Tallinn from the really very lovely small city of Helsinki. The World Heritage Old Town dates back to the thirteenth century and it was a delightful place to wander around. A nice view of the Old Town was to be had from the top of St Olav’s church tower: 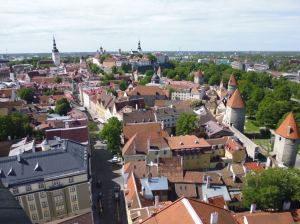 The conference was held in the historically significant Viru Hotel and the speakers dinner event was preceded by a really interesting talk from a curator of the on-site KGB Museum. The checkered past of the hotel is fully detailed here. 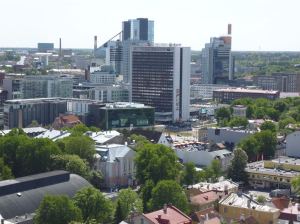 On this its fourth running, the Nordic Testing Days event drew its largest delegation yet, with over 300 attendees from around the world with, of course, a heavy local and Scandanavian bias. I was the only representative from Australia, but a couple of New Zealanders were also attending (and presenting) and the programme included some well-known names from the broader testing industry. With no strong bias towards context-driven testing, the conference seems to have a wide appeal and the delegates were from a diverse range of sectors and companies.

My talk was on “Growing Testing Skills using the Agile Testing Ecosystem”, an early experience report of using the James Bach & Michael Bolton version of the agile testing quadrants to try to skill up testers to operate across sprints, rather than just executing tests at sprint end. I had the luxury of the biggest room and, even though I was first up after lunch on the last day and had three other tracks as competition, it was still my largest conference crowd so far. The well-organized conference committee meant that it ran well and there were some good questions and follow-ups after my talk, so it was an enjoyable – if nerve wracking – experience.

Apart from presenting, I filled my days by attending sessions along with the other delegates. There were a couple of highlights from those sessions:

Some of my key takeaways:

Thanks again to the programme committee for selecting me and thanks also to my audience, your attendance was appreciated (and I realize there was a choice of sessions at the same time as mine). A big shout out to Rob Sabourin too for his continued support and encouragement in my testing career.